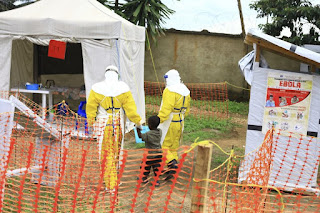 In this Sunday, Sept 9, 2018 file photo, health workers walk with a boy suspected of having the Ebola virus at an Ebola treatment centre in Beni, Eastern Congo. The World Health Organization says the risk of the deadly Ebola virus spreading from Congo is now "very high" after two confirmed cases were discovered near the Uganda border. The outbreak in northeastern Congo is larger than the previous one in the northwest and more complicated for health officials with insecurity from rebel groups. As of Friday, Sept. 28 there were 124 confirmed Ebola cases including 71 deaths. (AP Photo/Al-hadji Kudra Maliro, file)

WASHINGTON (THE WASHINGTON POST) - The United States has no plans to re-deploy personnel to fight the growing Ebola outbreak on the ground in Congo because of worsening security concerns, administration officials said Wednesday.

The outbreak in northeastern Congo is taking place in an active war zone and has now become the country's largest in more than four decades. Attacks on government outposts and civilians by dozens of armed militias have complicated the work of Ebola response teams, who have often had to suspend crucial work tracking cases and isolating people infected with the deadly virus. Violence has escalated in recent weeks, including attacks by armed groups this weekend near the operations center in Beni, the urban epicenter in North Kivu province

No U.S. citizens are working in the outbreak zone, but staff from the Centers for Disease Control and Prevention and the U.S. Agency for International Development are in Kinshasa, the capital, about 1,000 miles away. Additional personnel are working in neighboring countries. Whether to deploy personnel to the heart of the outbreak is a continuing debate within the administration. A few seasoned Ebola experts from the CDC were withdrawn from Beni in late August after an attack by an armed group against a Congolese military location along a road close to where the team was traveling, according to a senior U.S. Embassy official in Congo. No U.S. government personnel or other Ebola responders were targeted or in the immediate area of that attack.

"Securing the safety of our staff is our highest priority," one administration official said during a briefing for reporters Wednesday. He spoke on condition of anonymity because of rules set by the White House. Washington is continually monitoring the security situation, but right now, "it's simply too dangerous," he said.


Looming over those security concerns are the 2012 attacks in Benghazi, Libya, that killed a U.S. ambassador and three other Americans, according to public health experts familiar with discussions over U.S. personnel deployment who spoke on background to discuss matters candidly.

The official declined to say whether sending CDC experts under the protection of U.S. military personnel is under consideration. "I'm not going to rule in or rule out anything," he said. But he noted that during the 2014-16 West Africa Ebola epidemic that killed more than 11,000 people, the U.S. military provided only logistical support.


After CDC Director Robert Redfield raised the possibility last week that the outbreak has worsened so dramatically that it might not be brought under control, U.S. officials sought to downplay that scenario. They emphasized unequivocally that the administration's goal is to stop the outbreak.

"The Ebola response is a priority of the U.S. government," Tim Ziemer, a senior official at USAID, said at another briefing, hosted by the Center for Strategic and International Studies (CSIS). Ziemer had led global health security at the National Security Council but left that position abruptly in May after the global health security team he oversaw was disbanded under a reorganization by national security adviser John Bolton.

One of the biggest problems in controlling any outbreak, especially this one, is the inability of responders to effectively identify and trace all contacts with Ebola patients. Without that ability, the disease continues to spread. Particularly worrisome in this outbreak is that an estimated 60 percent to 80 percent of new confirmed cases have no known links to prior cases, making it virtually impossible for responders to track infections and stop transmission.

"That shows that your systems are not working, that you're failing to get your arms around this outbreak," said Stephen Morrison, senior CSIS vice president.

At the CSIS briefing, the World Heath Organization's emergency response chief, speaking from Geneva, said the outbreak is expected to last an additional six months, in a best-case scenario. Peter Salama also said informal health clinics, which are unregulated and often run by traditional healers, may have spread the virus in Beni as mothers and children sought help for cases of Ebola that had been misdiagnosed as malaria, which has similar early symptoms.
Africa Congo Ebola Newsroom Washington Post